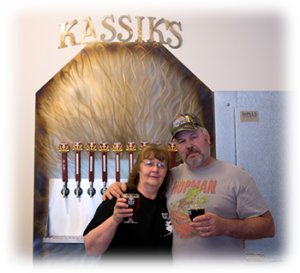 Owners:
Frank & Debara moved to Alaska in 1995, both working in the oil industry.

Frank Kassik’s passion for brewing, along with an extensive heavy industrial background enables him to maintain daily operations while brewing his well known quality craft ales.

Debara Kassik has 25 plus years in accounting, and handles all aspects of accounting, brew house scheduling, expediting and marketing.

Kassik’s Brewery is the result of Debara purchasing a home brew kit for her husband Frank Kassik for Christmas several years back. Frank’s passion for brewing began and soon he became a proficient home brewer. In 2004 Frank & Debara spent the entire summer building a 36 X 50 shop while working their regular jobs with the hope of someday having a brewery. We never really thought our dream of owning a brewery would come true, but it did. It was meant to be. Once we started building everything just fell in place.

In 2005 a seven barrel brew system was purchased and they spent another year remodeling the building to accommodate the equipment. The brewery opened its doors on Memorial Weekend 2006 with the Beaver Tail Blonde and Moose Point Porter. Moose Point Porter was one of Frank’s home brew recipes scaled up for the brewery.

Since opening Kassik’s has tripled the size of brewery, added a bottling line, multiple new tanks and kegs to try and keep up with the growth. We work hard to keep up the demand without compromising quality or risking our reputation to grow to the next level.

We are passionate about our beer, and we pride ourselves on brewing the best quality handcraft ales around!